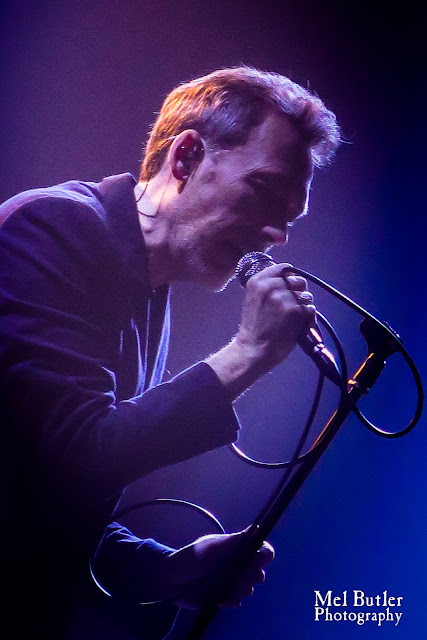 "...He cuts quite a sharp-dressed slender figure through the blue swathes of dry ice as his brother still sporting that wild bird's nest of hair cranks out the walls of noise behind him."


For reasons I can't fully fathom out myself, it's taken over 30 years for me  to be able to stand before The Jesus And Mary Chain live. Like many others, Psychocandy was pretty much responsible for my gateway into more exciting and challenging music as a teenager and yet despite thousands of ear-testing live experiences and obligatory yearly mud fests since then, this band to me have remained elusive. Until tonight. Thankfully I'm not rectifying this long-awaited chance in some soul destroying, corporate venue. The Mary Chain (quite fittingly) are playing one of Leeds' newest venues, former Halo nightclub 'The Church'. Its huge stained glass window acts as (in)appropriate backdrop to the band as they appear through the dense fog of billowing dry ice. Congregation, please be upstanding.

The next 90 minutes ticks off this long wait with the thickest of permanent markers. Old treasures sit side by side with a scattering of new(ish) songs from recently released album 'Damage And Joy', as well as a courteous sprinkle of 'hits'. We get 'April Skies', 'Far Gone Out', 'Blues From A Gun' and an utterly terrific 'Reverence'. It would have been gut-wrenchingly disappointing not to hear 'Some Candy Talking', one of the most perfect pieces of guitar noise ever created. The majority of the forty to fifty somethings in here seem to agree as its 'I Want Your Candy' words fade into rapturous applause.

New songs slot nicely into the set. Evidently some tracks from this first album in 19 years are reworked and leftovers from the previous 'Munki' era. 'All Things Pass' and  'Always Sad' being the highlight, the latter slightly reminiscent of 'Stoned & Dethroned's 'Sometimes Always' with Jim Reid dueting with female vocals again. He cuts quite a sharp-dressed slender figure through the blue swathes of dry ice as his brother still sporting that wild bird's nest of hair cranks out the walls of noise behind him.

Long gone of course are the chaotic 20-minute sets, playing with their backs to the audience. These days they're a full band, 'proper rock whores' as the lead singer sarcastically tells us, returning for an encore where the band backtrack over 30 years to pull out more early career noise-gems.. 'Nine Million Rainy Days' from 'Darklands' is epic and they then dig in deep with a quadruple volley of Psychocandy classics... 'Just Like Honey', 'The Living End', 'You Trip Me Up' and 'Taste Of Cindy'. The night ends on another new track 'War On Peace'  to bring us bang up to date again.

I'll undoubtedly echo the thoughts of everyone else in the room when I say how glad I am that the brothers Reid appear to have sorted out their differences and are collectively singing from the same hymn sheet again.


The Jesus And Mary Chain brought more than a little comfort to this church goer tonight.

Jesus And Mary Chain
The Church, Leeds
Posted by Plus One Magazine at Wednesday, March 29, 2017